On June 23rd 2017 the Kukkiwon and World Taekwondo announced the development of three new poomsae to be added to the current classic poomsae in competitions during the [World Taekwondo | WT] General Assembly in Muju, Korea. [1] [2]

In addition, it was announced that some of the classic poomsae would be dropped for use in competition and substituted for higher forms:

These changes are scheduled to be used at the 2018 Asian Games and the 2020 World Poomsae, Freestyle and Para Championships. [3] [4]

December 2017: The latest information we got this weekend from the WT vice president is that at the 2018 world championships competitors will be able to choose for the traditional (taegeuk, poomsae koryo - poomsae hansu) or modern (bigak 1-3) forms. Starting 2019 the modern forms will be compulsory.

February 2018: Poomsae competition rules will also be updated. Minor technical errors will not be counted anymore, only big errors for erroneous technique. Different judges will score different espects of the performance and those scores will be combined.

April 2018: The introduction of the new Poomsae & Freestyle competition rules have been temporarily postponed until further notice.

The following diagram is not definitive. It's based only on what can be seen in Kukkiwon's Nareusya video. It has not yet been verified against the above (new) video. 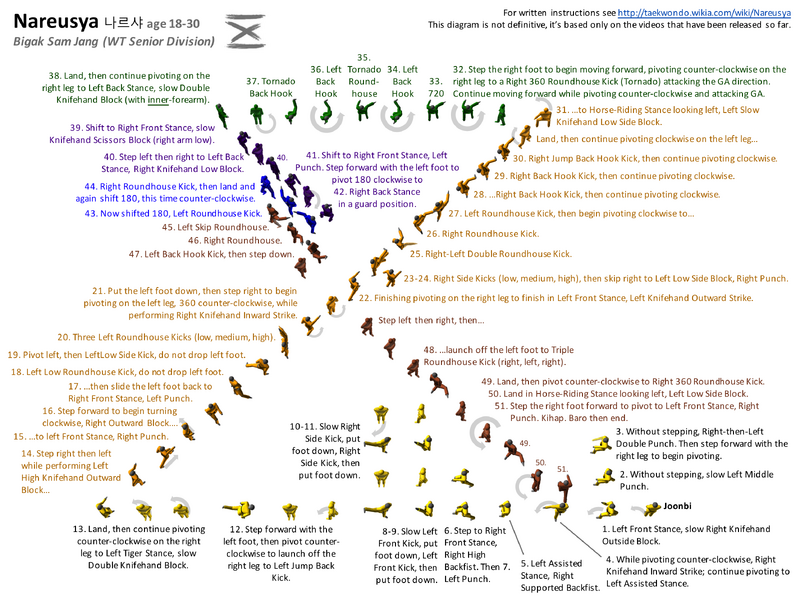 Retrieved from "https://taekwondo.fandom.com/wiki/Bee-gak_Sam_Jang?oldid=19465"
Community content is available under CC-BY-SA unless otherwise noted.