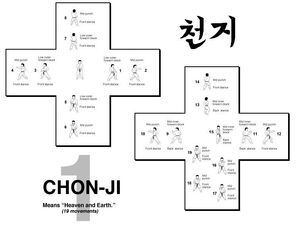 Chon-chi is the first ITF/Chang Hon-style color belt teul (form). Chon-chi has 19 movements diagrammed as a cross (or plus sign). Literally, Chon-chi translates as "heaven - light" which is interpreted as the creation of the world. It is therefore the initial pattern performed by an ITF beginner during their entrance into the world of Taekwon-Do.

When the two words Chon Ji are combined, they take on a different meaning: Lake Chon-Ji is the Heavenly Lake, located in a crater on Paektu-San (White Headed Mountain) located on the border between China and North Korea, which was the first residence of the legendary Dan-Gun before he established his capital at Asadal (now Pyongyang) in 2333 B.C.E.

Virtual tour: the Heavenly Lake can be seen on Google Maps here.

ITF Taekwon-do forms often come in two styles: Sine Wave and non-Sine Wave. In either case, the basic movements are the same. The difference is in the "up and down" motion that's used (or not), the rhythm of the movements, and the breathing. See main article Sine Wave for additional details. 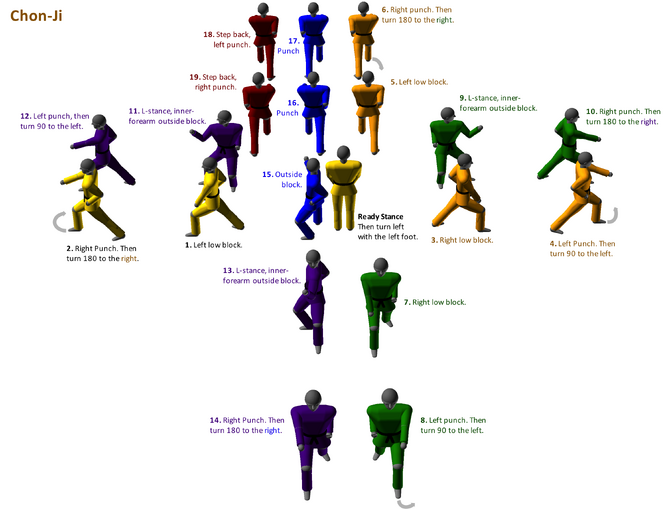 The other forms in the ITF-series of Color Belt forms are:

The primary reference is:

Retrieved from "https://taekwondo.fandom.com/wiki/Chon-Ji?oldid=19327"
Community content is available under CC-BY-SA unless otherwise noted.