In a Cross Stance the legs are positioned so as to form an X shape. The shin of the rear leg is touching the calf of the front leg. There are two versions of the Cross Stance: the Rear Cross Stance, and the Front Cross Stance.

The legs cross at the shin and calf to form an X shape. The key here is that the front foot is flat on the ground. It's the rear foot that is "crossed" by having just the ball of the foot on the ground. 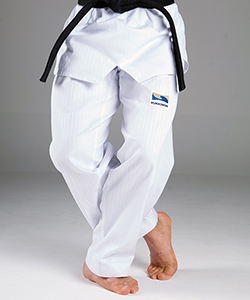 Again, the rear shin should be touching the front calf so that the legs form an X.