A dobok (‎도복) is a taekwondo training uniform. It consists of a top and pants, worn with a ddi (띠). The term dobok literally means "clothing of the way" (bok = clothing; do = the way, just as in the word taekwondo).

Generally speaking, there are three styles of uniform tops:

All styles of taekwondo wear similar long pants. Higher-ranking black belts may have black stripes down the leg. ITF-style uniforms will sometimes have ITF lettering down the leg.

For all styles of taekwondo, the basic taekwondo uniform is white, but there are many variations. For example, Instructors (especially high-level Black Belts) as well as Black Belt Club, Demo Team, and Leadership Team members may be given different color uniforms.

The school logo is often imprinted on the back of the uniform or is available as a sew-on patch, usually seen on the chest. Additional patches may also be used to denote membership in special teams. National flags are often sewn on the shoulder or chest of the uniform.

Some manufacturers sell uniforms in sizes based on your height in centimeters. Other manufacturers use a sizing system that goes from triple-zero (000) to 7, based on your height and weight. Generally, it's easier to shorten the sleeves and slacks than it is to take the waistline in, so as a rule-of-thumb it's probably smart to focus on your weight rather than your height when selecting your size, and then tailor the arms and legs as needed. 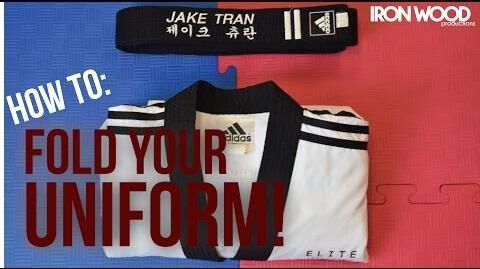