In taekwondo the floor pattern or lines of a form refers to the lines traced out on the floor while performing the taekwondo form. In Korean, this is sometimes called yeon-mu (연무), the same term used to denote a military drill. In karate the equivalent term embusen is used, though embusen can also refer to the spot where the form (kata) begins.

For Taegeuk forms, the terms Da 1, Da 2, Da 3, etc. refer to the Da and Ra directions on each of the three lines of the form.

In ITF-style taekwondo, a similar grid is often used to reference the various directions. Here, letters of the alphabet are used.

ATA-style taekwondo gets around this problem in a very different way: all forms are performed by starting facing East. In this way, the directions can always be specified unambiguously as North, South, East, West, Northeast, Southeast, etc. ATA forms are always performed along the lines of the Songahm Star. 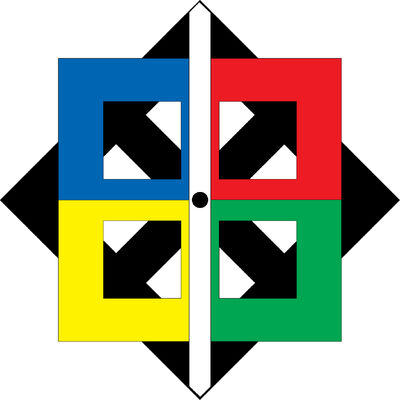 Retrieved from "https://taekwondo.fandom.com/wiki/Floor_pattern?oldid=18727"
Community content is available under CC-BY-SA unless otherwise noted.