WTF Style - Front Stance (also called Long Stance, Forward Stance, or ap kubi) is a stance in which the forward foot well in front of the rear foot

ITF Style - Walking Stance (gunnun seogi) - same as above, but:

In this position there may be a temptation to lean forward, or to turn the hips somewhat, but the hips should be held forward so that the body is complete upright. If you push your hips forward as much as you can after you've placed your feet in the correct position, you'll probably be in a correct posture. 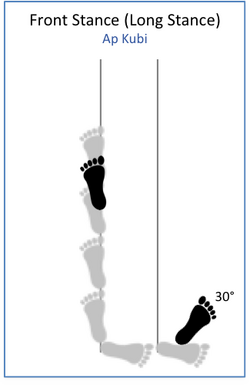 When the left leg is forward, this is called a Left Front Stance, and vice versa for the right leg. In other words, the stance is named by the leading leg. (In contrast, as one example, the Back Stance is named instead for the trailing leg instead.)