If you study taekwondo for every long, you eventually run into Korean writing. One style of writing used in Korea is based on Hangul, the modern Korean alphabet. As you’ll see in a few moments, it’s actually a very clever alphabet -- and it’s surprisingly easy to learn.

(There's another style of writing used in Korea as well, it's called Hanja -- it's an ancient style that's less commonly used nowadays, based on Chinese characters. If you want an analogy, Hanja is used a bit like "gothic script" in English -- it's decorative and evokes ancient tradition.)

Before we start with the Hangul letters, let’s start with how the letters get organized into words.

If we break that word into syllables, we get three syllables:

Each syllable is a block of letters going left-to-right.

The syllables still go left-to-right just like English, but the letters inside the syllables (mostly) go top-to-bottom. It’s actually very clever when you think about it. In English-speaking schools, we have to teach our children how to divide words into syllables after the children have learned how to write. In Korean schools, children don’t have to be taught syllables separately – syllables are already an intrinsic part of their writing system!

Now let’s talk about the alphabet, because it's very clever too. The letters in Hangul are (kind of) designed to “look like they sound.” How do you make an N sound? You press your tongue against your teeth. In other words, your tongue is pushed forward. Here’s what an N looks like in Hangul.

See what we mean? The Hangul N kind-of looks like a tongue pressing forward against the teeth. Now how do you make a G sound? You pull your tongue back to the rear of your mouth. Here’s what G looks like in Hangul.

The symbol for G is pointing to the back of the mouth, rather than the front of the mouth. Clever!

There’s a word for this. Any alphabet where the letters are designed to “look like they sound” is called a featural alphabet. English is not featural, of course. Linguists often point to Hangul as a great example of one of the cleverest featural alphabets in the world.

Now of course not every Hangul letter looks exactly like it sounds. But a lot of thought went into making that true in as many cases as practical. For example, in Hangul, letters that sound a bit alike are designed to look a bit alike as well. For example in English, all of the letters t, g, and d are called “plosive,” which means they’re all made by quickly stopping one's exhalation at the end of the sound. In Hangul, all plosive sounds have a horizontal bar along the top of the letter:

There are many more examples, but you get the idea. Hangul letters are designed to “look like they sound,” and they’re also designed so that “similar sounds have similar shapes.” 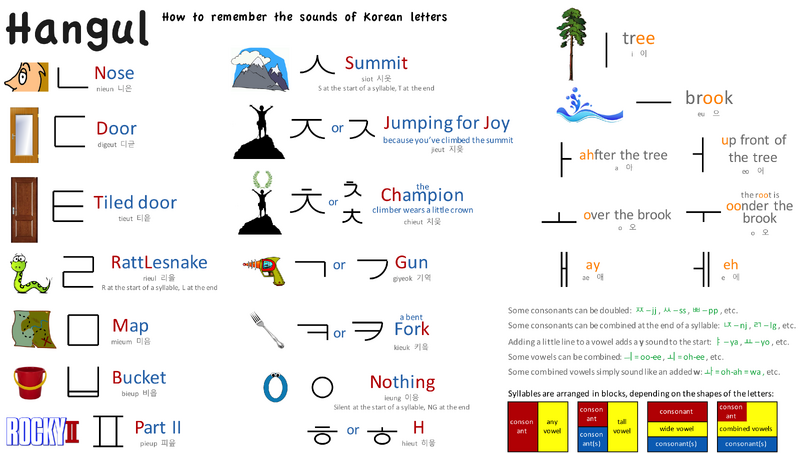 So here’s how you would spell taekwondo in Hangul: 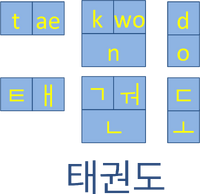 To the untrained English-speaking eye, Hangul words may look a bit like spaghetti, but based on what you’ve learned so far, you can see that this is actually very clever writing. You can immediately see that this word has three syllables, because there are three blocks. The letters in each block are (mostly) arranged top-to-bottom. With all of that as preface, here are the letters in the Korean alphabet  (click on this graphic to enlarge): 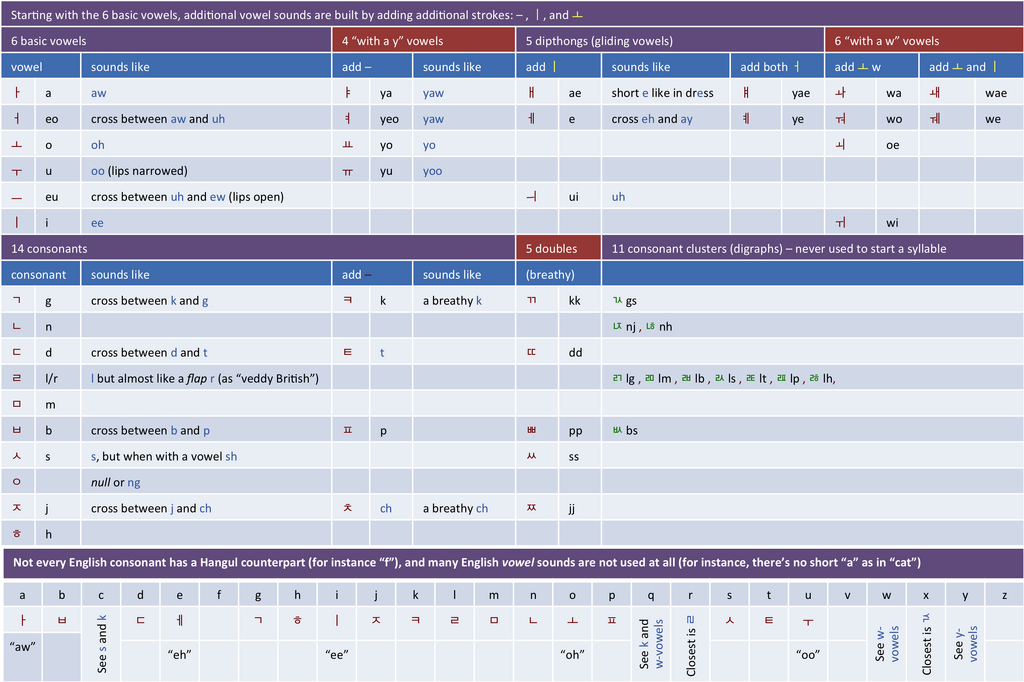 Also, in English most syllables consist of just one, two, or three sounds. For example:

Sometimes there are four sounds, as with “Domes.” In that case, the last two sounds (M and S) make a complex combination at the end of the word: two constants glommed together. In all of the above examples, the long O sound serves as the vowel.

This same thing is true in Korean. Most syllables have one, two, or thee sounds. When it’s three sounds, just as with English, it’s usually a consonant – vowel – consonant syllable. If it’s just two sounds, it’s usually a consonant-vowel syllable. Because the vowel sound is always "in the middle” of each Korean syllable, the vowel sounds are called Medials. The first sound in a word is called the Initial; that’s a consonant. If the syllable has three sounds, that last sound is called the Final. Just as with English, sometimes the Final can be complex, in that two consonant sounds might be glommed together.

You’ll notice that we didn’t talk about how to write one-sound syllables. One-sound syllables are always a vowel sound. In this case, there is no Initial consonant. But having no Initial makes the Hangul one-syllable-block look ugly: it’s just a lonely vowel sitting there all by itself, alone. Hangul solves this problem by having a silent syllable, represented by a circle, like zero.

If ever a syllable has just one sound – a vowel sound – you always use the silent 0 as the first letter of the syllable, so that the Medial will have an Initial to partner with.

An analogy: In English, the name Isaac has just a single vowel as its first syllable ("I"). In English, we don't mind writing a single-vowel by itself in a syllable. In Hangul, you would never do that. As an analogy, you'd probably write the name as Hisaac instead, where the H is understood to be silent. That's how the letter ㅇ works in Hangul: it's a silent consonant used to start vowel-only syllables.

That’s it! You now know all the basics of reading and writing Hangul. There’s more to learn of course. For example, Hangul is very specific about how you write each letter, which pen strokes go first. And how to pronounce each letter – especially the vowels – that’s a whole topic in its own right. There's an excellent guide to pronounciation at the Korean Wiki Project.

In English, the same letter can look slightly different depending on whether the letter is handwritten or typed, the font being used, etc. So too Hangul has variations in its letter. For example, these are both G followed by I:

In the latter case, the G has been made by curving the back line downward rather than dropping it straight down; this is commonly done whenever the G will be placed up against another letter (in this case I). The basic shape remains the same however: a horizontal stroke that ends with a downward stroke. Similar variations exist for some other Hangul characters. For example, the following table shows how various Hangul initials combine with Hangul medials. Notice how the shape of the G changes in the first row, depending on what letter follows the G. 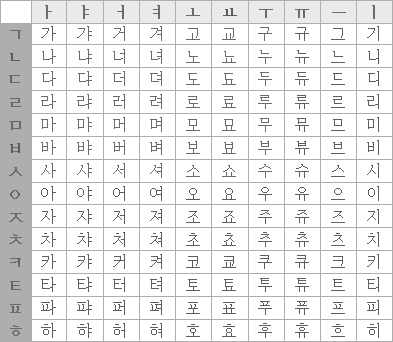 Here are some examples of some common taekwondo words written using Hangul. Notice that they all have the same last syllable 기, which is a "g" followed by an "i."

Why do Koreans have such a clever alphabet? Or to put it another way, why does English have such a strange, non-featural alphabet?

Hangul was promoted by Sejong the Great, the fourth king of the Joseon Dynasty. Up until that time, the Korean peninsula used a variation of Chinese characters (known as Hanja) for writing. In explaining the need for the new script, King Sejong explained that the words and sounds of the Korean language were fundamentally different from the Chinese language. Using Chinese characters to write was so difficult for the common people that only privileged aristocrats could read and write fluently. The majority of Koreans were effectively illiterate before the invention of Hangul. Hangul was designed so that even commoners could learn to read and write. 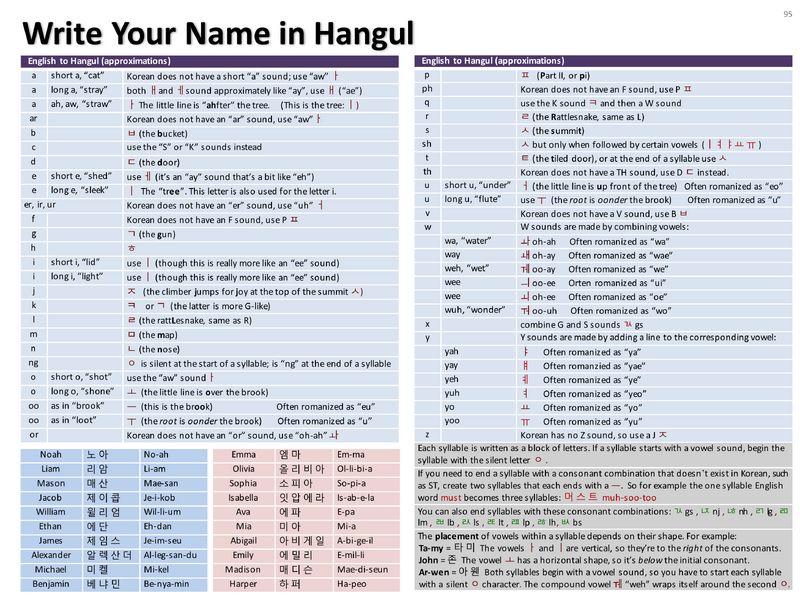