The High Block (also called Upward Block, Rising Block, Face Block, ollyeo makgi or olgul makgi) is intended to deflect an attack that comes from above, such as a downward strike. 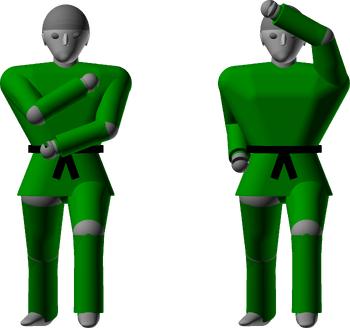 When sparring, a block similar to the High Block (called a Face Block) is sometimes used: the blocking arm is kept more straight, without much of a bend at the elbow. The idea is that this block is still being used to block an attack that's coming nearly-downward at about face-height. For example, this would block a face-height Inward Crescent Kick using the upper-arm as the blocking surface.

In ITF-style taekwondo, this block is called a Rising Block.

The main purpose of this technique is to block the opponent's hand, foot or weapon directed towards the head, although it is frequently used against a punch or side piercing kick directed against the bridge of the nose and area above. Always maintain a full facing posture towards the opponent at the moment of block, when utilising a walking, sitting, parallel, close, one-leg, diagonal or x-stance.