During the 1960s, the goal of the Korea Taekwondo Association (KTA) was to promote a unified style of taekwondo, as opposed to the nine separate martial arts styles of the Nine Kwans, and to promote the growth of this new martial art around the world. By establishing the ITF, Choi Hong Hi effectively severed his ties with the KTA. Without Choi, the KTA continued to work in parallel, eventually establishing the organizations Kukkiwon and World Taekwondo (WT). Today, ITF and WT are the two largest taekwondo federations worldwide.

The ITF was initially formed as a federation of taekwondo associations from the following countries as its founding members: South Vietnam, Malaysia, Singapore, West Germany, the United States, Turkey, Italy, Arab Republic of Egypt and South Korea.

Primary Branches of the ITF[]

From 1966 to 1972 Choi operated the ITF from within of Korea. Due to conflicts with the South Korean government (at the time a dictatorship), in January 1972 General Choi moved the ITF headquarters out of Korea to Toronto Canada (see the article Choi Hong Hi to understand the context of this move). The South Korean government responded by withdrawing sponsorship of the the ITF, and established instead the Kukkiwon and the World Taekwondo Federation to continue the mission of taekwondo's globalization. Nonetheless, the ITF continued to grow and thrive as an independent federation. In 1985, Choi relocated the ITF headquarters back to Vienna, Austria. 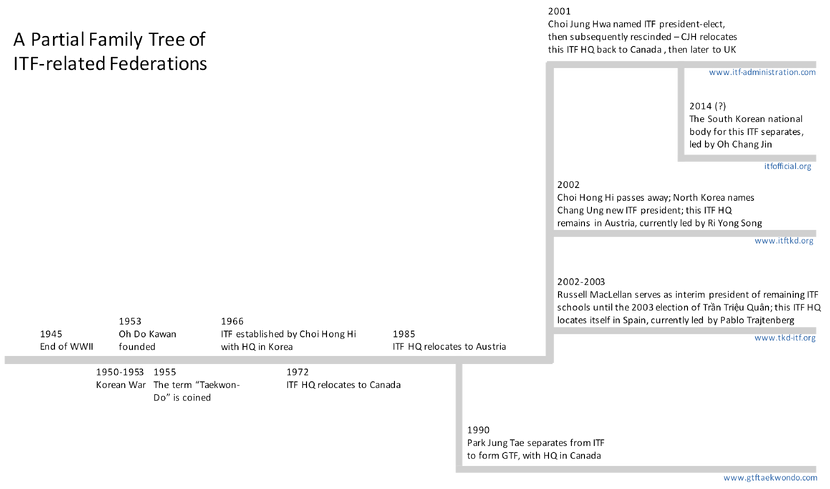 (1b) The International Taekwon-Do Federation HQ Korea (ITF HQ Korea) is a separate offshoot of the above ITF. ITF HQ Korea was formerly the national body representing the ITF in Korea, but then it split from the ITF and created this separate offshoot, with headquarters in Seoul. Despite its somewhat misleading name, this organization is NOT the headquarters of the ITF, it is merely another (and more recent) offshoot of the ITF. http://itfofficial.org

2. General Choi subsequently died in June 2002. According to North Korean sources, on his deathbed in June 2002, General Choi allegedly said that he wanted a man known as Chang Ung, a North Korean IOC member, to take over as President. An Extraordinary Congress of the ITF was called with Chang Ung declared as the new President; but the legality of this Congress is disputed by some.

In 2014, this branch of the ITF signed a Protocol of Accord with the WTF, allowing competitors from both federations to compete in each other's tournaments.

3. Those claiming that the Congress was illegal (i.e., against the ITF's Constitution) held another Congress, at which Trần Triệu Quân (an 8th degree black belt) was elected as President. Thus there are now three organizations claiming to be the ITF.

For all three ITFs, the main functions are to coordinate and approve tournaments and seminars, set standards for teaching (patterns, sparring, destruction), collaborate with affiliated member organizations, and service members in regards to rank and certifications. Generally speaking, athletes registered with one ITF are allowed to compete in tournaments sanctioned by other ITFs.

See Also: List of Taekwondo Associations - lists many taekwondo associations, including those that follow the ITF style.

Forms, or teul in Korean, originally called hyeong, form an important aspect of training in Taekwon-Do. They are equivalent to the kata in karate. The majority of the patterns (except Yul-Gok, Ul-Ji and Tong-Il) start with a defensive move, which emphasizes taekwon-do's defensive nature. All of the patterns start and end at the same location. This ensures that the practitioners' stances are the correct length, width, and in the proper direction.

There are 24 patterns in the official ITF syllabus; this is symbolic of the 24 hours in a day. One additional pattern, Ko-Dang (or Go-Dang), was retired/replaced by Juche in 1986 by General Choi Hong Hi. Ko-Dang and Juche are similar, and some Taekwon-do organisations have renamed Juche to Ko-Dang though most perform the newer pattern. The names of these patterns typically refer either to events in Korean history or to important people in Korean history. Elements of the patterns may also be historical references, such as the number of moves, the diagram, the way the pattern ends, and so on.

Patterns (teul) are performed in accordance with The Encyclopedia of Taekwon-Do in 15 volumes written by General Choi Hong Hi, the latest edition being from 1999 (later editions have been published, but the 1999 editions were the last General Choi Hong Hi was directly involved with). This comprehensive work contains 15 volumes with volumes 8 through 15 dedicated to the 24 patterns and containing descriptions of the pattern movements as well as pictures showing possible applications of some of the movements. There is also the book entitled The Korean Art of Self Defense (the 1999 edition, the latest used by ITF under Grandmaster Tran Trieu Quan and ITF under Grandmaster Choi, or the 2004 edition, the latest used by ITF under Chang Ung), also known as the Condensed Encyclopedia, written by Choi Hong Hi. This is a single condensed encyclopedia of approximately 770 pages with a section dedicated to the 24 patterns.

The 24 Patterns in Taekwon-Do ITF are:

* Ko-Dang is an older form, replaced with Juche. Ko-Dang is still taught in some schools however.

U-Nam is an ITF/Chang Hon-style form that appears only in the 1959 edition of Choi Hong Hi's Tae Kwon Do Teaching Manual.

The International Taekwon-Do Federation's sparring rules are similar to WT's rules, but differ in several aspects.

Unlike WT-sparring, an additional point is not awarded for jumping/spinning kicks. Full-force blows are not allowed, and knockouts result in a disqualification of the attacker, although these rules vary between ITF organizations. Other fouls in ITF sparring include heavy contact, attacking a fallen opponent, leg sweeping, holding/grabbing, intentional attack to a target other than allowed (for example below the belt, attacks to the back). At the end of two minutes the competitor with more points wins.

The competition area is typically a 10x10 meter square in international championships. Circular rings are also used, although generally not under competitive circumstances. Competitors do not wear the hogu as they would for WT-style sparring, but they are required to wear approved foot and hand protection equipment, as well as optional head guards.