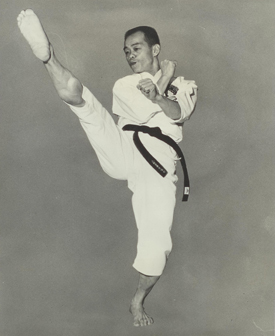 This article pertains to the martial artist Jhoon Rhee. To read about the Jhoon Rhee style of taekwondo, see Jhoon Rhee Taekwondo.

RHEE, Jhoon-goo (January 7, 1932 - April 30, 2018), commonly known as Jhoon Rhee, was a South Korean master of taekwondo who was widely recognized as the Father of American Taekwondo for introducing this martial art to the United States of America since arriving in the late 1950s.

Rhee was born on January 7, 1932, in Korea, during the period of Japanese occupation. He began training in the martial arts at the age of 13, without his father's knowledge. Rhee received martial art training under Nam Tae Hi and graduated from the Chung Do Kwan.

Rhee first visited the U.S. in 1956; he was in San Francisco after having worked with the US Air Force as an interpreter during the Korean war. From there, Rhee traveled to Gary Air Force Base in San Marcos, Texas for aviation training.

In 1957 Rhee emigrated to the United States permanently, taking up residence with a family in San Antonio, Texas that he had previously met while stationed in the U.S. In San Antonio, Rhee started a martial arts club (located in nearby Austin at 3403 Guadalupe Street) teaching what he was then calling Korean Karate. In 1960, Rhee was visited by Choi Hong Hi who convinced Rhee to call his martial art taekwondo, thus making Rhee the first taekwondo instructor residing in the U.S.

In 1962 Rhee relocated to Washington, D.C. where he was employed at a local karate school. Shortly thereafter Rhee opened his own school at 2035 (or 2013?) K Street NW in Washington, D.C. Rhee later opened other schools in the D.C. area (including Maryland and northern Virginia). His style has since spread to other schools, especially in eastern Europe.

In 1973, Rhee made his only martial arts movie, entitled When Taekwondo Strikes. Jhoon Rhee also starred in a feature film in 1980 entitled Return of Rhee, released in Korea and for the Asian and international markets. It was renamed Rampage for U.S. distribution, but never got released in America. Rhee's protégé Jeff Smith and student Randy Anderson co-starred in the picture which was filmed on location in Seoul and Busan, South Korea.

Rhee was well known in the Washington, D.C. area for a television commercial that has a jingle by Nils Lofgren and features the catch phrase (spoken by his own young children), "Nobody bothers me," followed by "Nobody bothers me, either." In 2000, Rhee was the only Korean-American named amongst the 203 most recognized immigrants to the country by the National Immigrant Forum and the Immigration and Naturalization Services.

He created 'Martial Ballet' which is a martial art form that is conducted to music. Martial Ballet has been performed by different people in different ways and was incorporated in Rhee's school curriculum.

Retrieved from "https://taekwondo.fandom.com/wiki/Jhoon_Goo_Rhee?oldid=19314"
Community content is available under CC-BY-SA unless otherwise noted.