Naihanchi (ナイハンチ?) (or Naifanchi (ナイファンチ?), Tekki (鉄騎?)) is a karate Kata, performed in horse-riding (straddle) stance (naihanchi-dachi (ナイハンチ立ち?) / kiba-dachi (騎馬立ち?)). Its name translates to internal divided conflict. The form makes use of close-in fighting techniques and grappling. There are three modern kata derived from this (Shodan, Nidan and Sandan).

Some researchers believe Nidan and Sandan were created by Anko Itosu, but others believe that it was originally one kata broken into three separate parts (probably due to constraints of space). The fact that only Naihanchi/Tekki Shodan has a formal opening suggests the kata was split. In Traditional Taekwondo the three forms in this series include:

It has been suggested the kata was originally developed when fighting against a wall / ledge / narrow confined space which is unlikely[citation needed]; however it could be used for this purpose. Whilst the kata is linear, moving side to side, the techniques can be applied against attackers at any angle. The side to side movements in a low stance build up the necessary balance and strength for fast footwork and body shifting. The kata are intricate strategies of attacking and defensive movement, done in the kiba dachi, for the purpose of conditioning the legs to develop explosive power. If one rotates one's torso a few degrees to one side or the other while performing Naihanchi/Tekki, the result is the Hachi-monji, or figure eight stance. 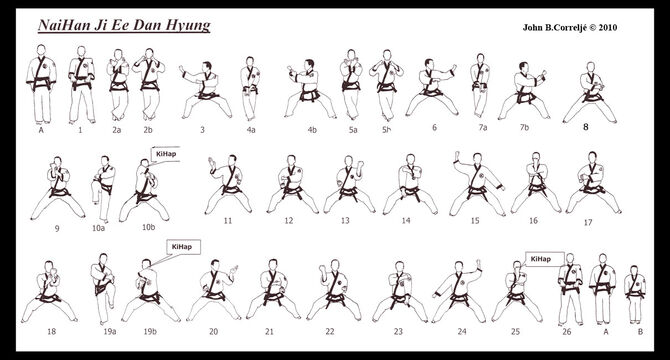 Retrieved from "https://taekwondo.fandom.com/wiki/Naihanchi_Ee-Dan?oldid=13021"
Community content is available under CC-BY-SA unless otherwise noted.