An Outside Block (also called on Outside Middle Block, Outward Block or bakkat makgi) is one of the most fundamental blocks in taekwondo. This block can use either the Inner Forearm or the Outer Forearm for blocking. As with most blocks, it can be performed with either a fist or a knifehand. In can be performed either in front of the body, or to the side.

This is the style of Outside Block most often seen in Kukkiwon/WTF-style taekwondo. The blocking surface is the outer forearm (i.e, the pinky-side of the forearm, not the thumb-side.) 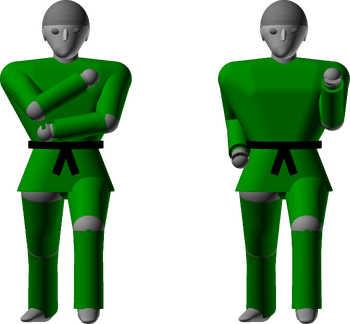 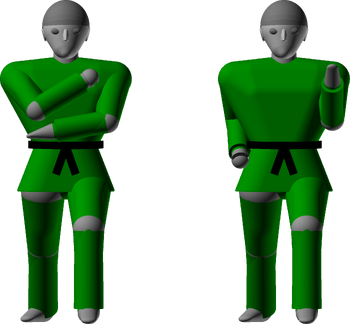 Variation: Inner-Forearm (or Palm-Up) Outside Block[] 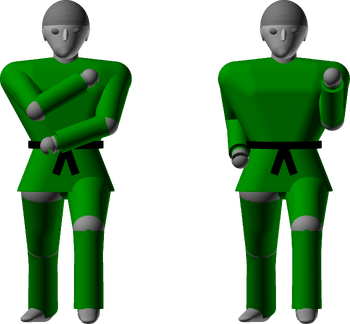 As with many blocks, the Outside Block can also be performed to the side of the body. This is seen for example at Step 2 of Palgwae Il Jang, and at Step 11 in the form Yul-Gok. This applies to both the Inner Forearm and the Outer Forearm versions of the block. 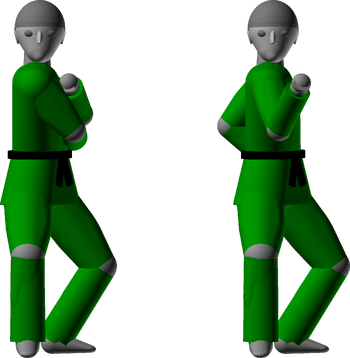 As with many blocks, the Inner Forearm Outside Block can be augmented with the off-hand. This is seen, for example, at step 37 in the form Yul-Gok, the High Double Forearm Block (where, as the name implies, the blocking arm blocks high, with the fist at about nose-height rather than the normal shoulder-height). The augmenting fist is also held palm-up, like the blocking fist, in front of the chest.

In addition to the above, there are a number of other "augmented" versions of the Outside Block. These are blocks where the blocking arm is augmented by a supporting arm. As with Outward Blocks in general, these can be done either with the inner-forearm or the outer-forearm; they can be done with with fists or with knife-hands. See for example: