This Traditional Taekwondo form is also used in Shotokan Karate. There may be differences between the Taekwondo version and the Karate version of this form.

The Rōhai kata are a family of kata practiced in some styles of karate. The name translates approximately to "vision of a Crane" or "vision of a heron". The kata originated from the Tomari-te school of Okinawan martial arts. It was called Matsumora Rōhai, after Kosaku Matsumora, who was presumably its inventor. Ankō Itosu later took this kata and developed three kata from it: Rōhai shodan, Rōhai nidan, and Rōhai sandan. In Shorin-ryū/ Matsubayashi-ryū this kata introduces Gedan Shotei Ate (Lower/Downward Palm Heel Smash) and Ippon Ashi Dachi. (One Leg Stance) It contains a sequence of Tomoe Zuki (Circular Punch) exactly the same as the one in Bassai, although the ending of the sequence chains into Hangetsu Geri/Uke (Half Moon Kick/Block)

In modern Karate, some styles teach all three kata (such as Shito ryu). However, other styles employ only one of them as a kata (such as Wadō-ryū, which teaches Rōhai shodan as Rōhai). Gichin Funakoshi, founder of Shotokan, redeveloped and renamed Rōhai as Meikyo (明鏡), literally "bright mirror", often translated as "mirror of the soul." Meikyo is a combination of all three different Rōhai kata, containing elements of each. In Tang Soo Do and Soo Bahk Do, practitioners have added a board (or brick) breaking element to the form, which can be performed using either a downward punch or palm strike. 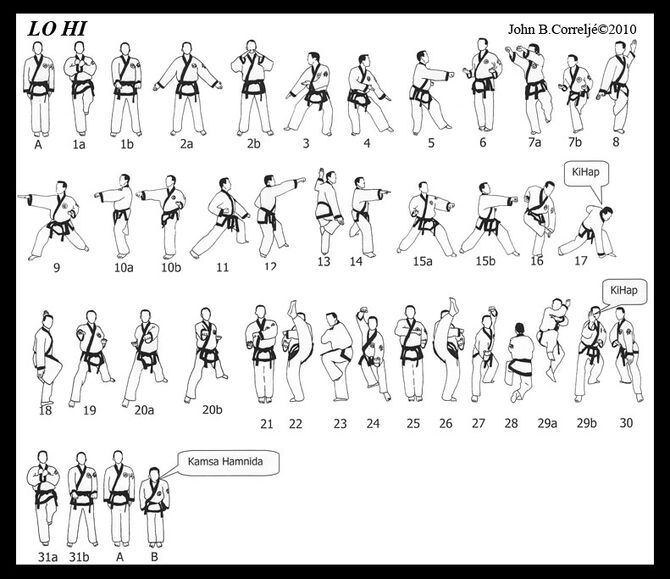 Retrieved from "https://taekwondo.fandom.com/wiki/Rohai?oldid=17345"
Community content is available under CC-BY-SA unless otherwise noted.