This form is a traditional taekwondo form, meaning it pre-dates contemporary forms (such as those used by the ITF, ATA, and WTF). In other words, this is a form used during the 1950s within the Nine Kwans that eventually came together to form taekwondo.

The karate kata Seisan (alternate names: Sesan, Sei-Shan, Jusan, Hangetsu) literally means '13'. Some people refer to the kata as '13 Hands', '13 Fists', '13 Techniques', '13 Steps' or even '13 killing positions', however, these names have no historical basis.

Seisan is thought to be one of the oldest kata, being quite spread among other Nahate schools. Shito-ryu has its own version and different versions are now practised even in Shurite derivatives like Shotokan (called Hangetsu) and in Wado-ryu (called Seishan). Isshin-ryū also adopted this kata. This kata is also practiced in Korean styles such as Tang Soo Do and Soo Bahk Do and is called Sei-Shan or Seishan in Korean. Due to its difficulty, this kata is often reserved for advanced students.

There are numerous theories as to the naming of the kata. These include the number of steps originally in the kata, the number of different types of 'power' or 'energy' in the kata, the number of applications, or that the kata represents defence against 13 specific types of attack. The most likely explanation is the number of non-repeating techniques contained within the kata. It is believed Seisan derives from Yong Chun White Crane Boxing from Fujian Province in Southern China, where the form is known as 'Four Gate Hands'. (This is completely unproven and uncorroborated. There are some other Chinese styles having a form called 'Shisan' (13) in their curricula, but a link from a specific kung-fu form to Okinawan Seisan has never been established.) 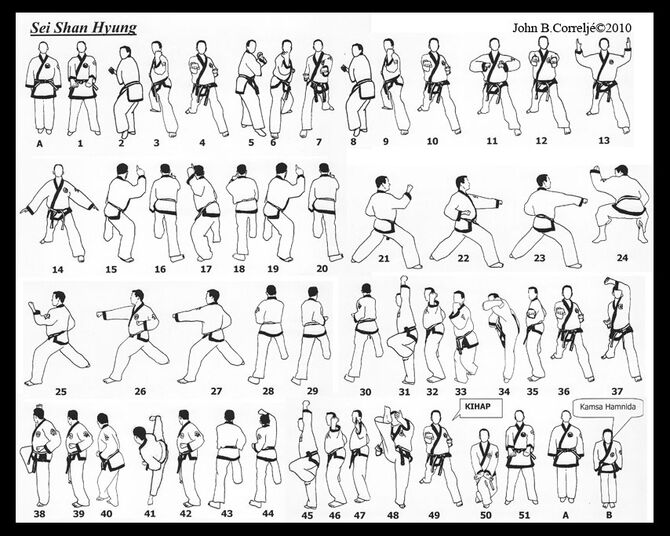 Retrieved from "https://taekwondo.fandom.com/wiki/Sei-Shan?oldid=13053"
Community content is available under CC-BY-SA unless otherwise noted.