This article pertains to the form Jit-te. For the weapon jitte, see Taekwondo Weapons Training.

Ji-in, Ji-on, and Jit-te (or Ship Soo) form a group of kata used in Shotokan Karate and other karate styles, beginning with the same characteristic kamae of the left hand covering the right, which apparently has roots in ancient Chinese boxing. Their origin is thought to be from the Tomari-te school, however Hirokazu Kanazawa speculates that the Jion kata were devised in the Jionji 慈恩寺, the Jion temple, where martial arts were famously practiced. From there, Kanazawa believes the Jion kata were spread into the Tomari region.

Ji-in - Ji'in 慈陰 ("Inverted Mercy") is important for the execution of many simultaneous techniques and the often-repeated stances, enabling swift changes of direction while maintaining balance, power and steps of equal length. It has, however, been removed from the Japan Karate Association teaching and grading syllabus.

Ji-on - Ji-On 慈恩 ("Mercy") is a representative kata in the Shotokan system because of the importance of the perfection of the basic stances it contains, notably zenkutsu dachi and kiba dachi (horse stance). Also practiced in some Shito Ryu organizations, emphasis is also placed on kokutsu dachi, the kata is noticeably shorter than its Shotokan counterpart.

Jit-te - The mastery of Jit-te (Jutte 十手 "Ten Hands") should in theory enable one to face ten adversaries. Some claim that the name is derived from the position of the raised fists, resembling a type of sai known as a jutte, which occurs a number of times in the kata. This rather short kata of only 24 movements contains a number of defences that can be implemented against the bo staff. Sometimes spelled Jitte; also known in some styles as Sip Soo. 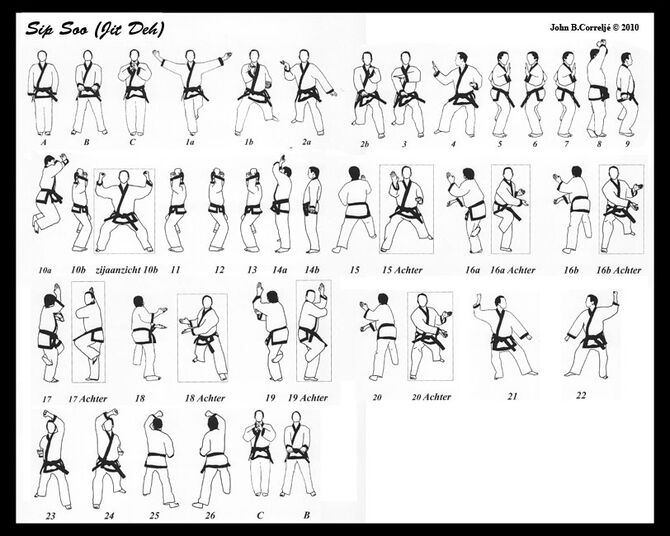 Retrieved from "https://taekwondo.fandom.com/wiki/Ship_Soo?oldid=13055"
Community content is available under CC-BY-SA unless otherwise noted.