Taegeuk Chil Jang is the seventh of eight "taegeuk" forms (i.e., poomsae) used by Kukkiwon and World Taekwondo (WT). The word "chil" is the number 7 in the sino-Korean numbering system.

Each taegeuk form is represented by a trigram (such as ☶); trigrams are divination symbols derived from the I Ching. The trigram for Taegeuk Sam Jang represents the concept of "Kan" (also spelled Gan). Kan represents a mountain peak, which is solid, stable, and unmovable. This form teach commitment to both motion and to immobility, with rapid movements forward followed by sudden stops. (See the article Taegeuk for additional detail regarding the symbolism of this form.)

This form introduces the Cat Stance (also called Tiger Stance), the Knee Strike, and the Crescent Kick as well as a number of new blocks. Some say the prominence of the Tiger Stance in this form is also associated with the "mountain" symbology of the form, since in Korean culture tigers are associated with life in the mountains.

The blocks in this form are intended to reflect immovability (like a mountain); i.e., rather than reflecting the blows, they take the blows head-on. This can be seen for example at step 16, the Low Cross Block. 2nd Gup grade trainees practice this poomsae. Unlike previous Taegeuk forms, this form introduces an exceptionally large number of new techniques.

The following video is a step-by-step demonstration of Taegeuk Chil Jang, with notes. 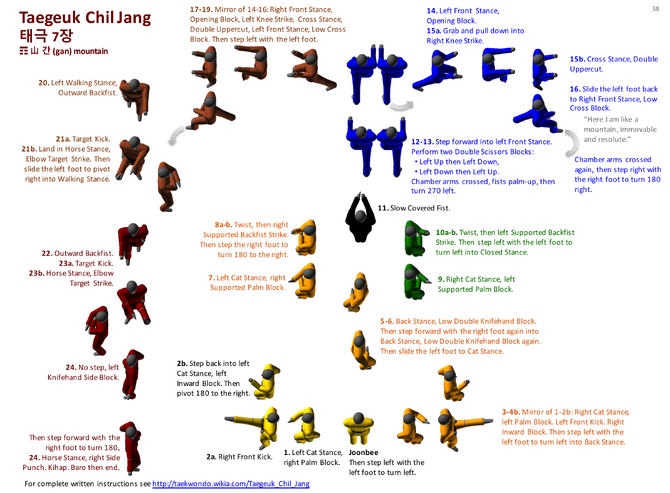 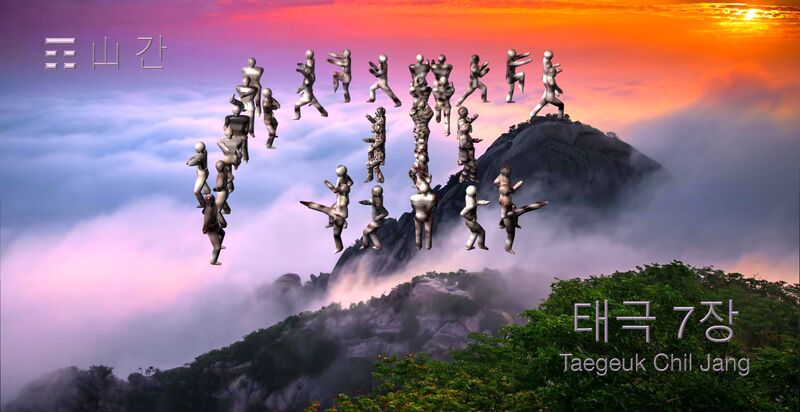 Retrieved from "https://taekwondo.fandom.com/wiki/Taegeuk_Chil_Jang?oldid=19809"
Community content is available under CC-BY-SA unless otherwise noted.