This article refers to the Taegeuk forms. For the Taegeuk symbol, see Taekwondo Philosophy.

Taegeuk (in Kukkiwon/WT Taekwondo) refers to a set of poomsae or forms used to teach taekwondo. A form, or poomsae (also romanized as pumsae or poomse) is a defined pattern of defense-and-attack motions. Outside of the context of taekwondo, the word taegeuk (the Korean pronunciation of Taiji / T'ai Chi) refers to the Taoist principle of the "unity of opposites" (yin and yang). Taegeuk can also refer to the red and blue circle used in the flag of South Korea.

Generally all students studying Kukkiwon/WT Taekwondo must learn taegeuk forms to advance to a higher level of belt. There are eight Taegeuk forms, each one more complex than the last, that display the student's mastery of the techniques learned. In order to receive a black belt, the student must generally perform all taegeuk forms consecutively. In the early 1970s the taegeuk forms replaced the older Palgwae forms that were previously used in Kukkiwon/WT taekwondo; some school still teach palgwae forms.

Each Taegeuk form symbolizes a specific force of nature and is represented by trigrams (originally derived from the I-Ching) similar to those found in the four corners of the South Korean flag.

The name of each taegeuk form is a three-word phrase:

So for example the name taegeuk il jang translates as first chapter of the taegeuk. See Taekwondo Symbolism and Taekwondo Philosophy for additional detail.

The eight taekgeuk poomsae are:

In 1965 the Korea Taekwondo Association appointed a committee of representatives from six of the Nine Kwans to develop the forms for what is now called Kukkiwon- or WT-style taekwondo. The committee consisted of:

In 1967, this committee introduced the Palgwe and Yudanja (Black Belt) forms (including a simpler version of Koryo). In 1971 two additional kwans joined the committee:

This expanded committee went on to develop the Taegeuk forms.

In addition, however, each trigram also says something about the associated taekwondo floor pattern for that form. Each Taegeuk floor pattern is also made up of three lines. On each line in every pattern, there is a 180 degree turn:

Consider as an example Taegeuk Sam Jang. The associated trigram is a solid line, broken line, solid line (☲). Now consider the floor pattern. On the first line of the pattern, you turn your body 180 by moving the lead foot (the right foot) to the rear and turning. On the second line of the form, however, you turn 180 by simply pivoting in place. Then again on the third line, you turn by moving the lead foot.

This same scheme applies to all the Taegeuk forms. Note that In Taegeuk Pal Jang, the 180 turn on the third line is accomplished by cross-stepping, which is considered a pivot. Note also that the trigrams are read bottom-to-top, so the bottom line of the trigram represents the first line of the Taegeuk form.

Utilizing every possible combination of solid and broken lines yields eight trigrams. The Korean word for eight is "pal" and the word for trigram is "gwae", so the eight-trigrams are called the pal-gwae (or palgwae). The previous set of KTA/Kukkiwon taekwondo forms used before the Taegeuk forms were called the Palgwae forms and are represented by precisely the same set of trigrams. Because the trigrams number only eight, the trigrams are often arranged in an octagonal shape when depicted graphically. For this reason, the octagon is also considered an important part of the symbolism of the pal-gwae.

Each trigram is associated with an element from nature (sky, ground, water, etc.) but also has other connotations as well. See Taekwondo Symbolism for a more complete list of associations.

There are a number of videos on the Web that illustrate practical applications of Taegeuk forms, in terms of self-defense. Some of the better ones are listed below.

Taekwondo as originally developed in the 1940-1960s focused on combat and self-defense. Especially since the inclusion of taekwondo in the Summer Olympics however, there has also been a line of teaching and training that focuses on the sport aspects of taekwondo, especially for tournament sparring. There has been a recent trend in taekwondo called Sil Jeon that is a reaction to the sports emphasis, the trend emphasizing a return to practical applications of taekwondo for self-defense.

Here are some super-high-resolution images that are suitable for large-format printing, such as for wall posters. These files can be taken to any print shop and printed in poster sizes: 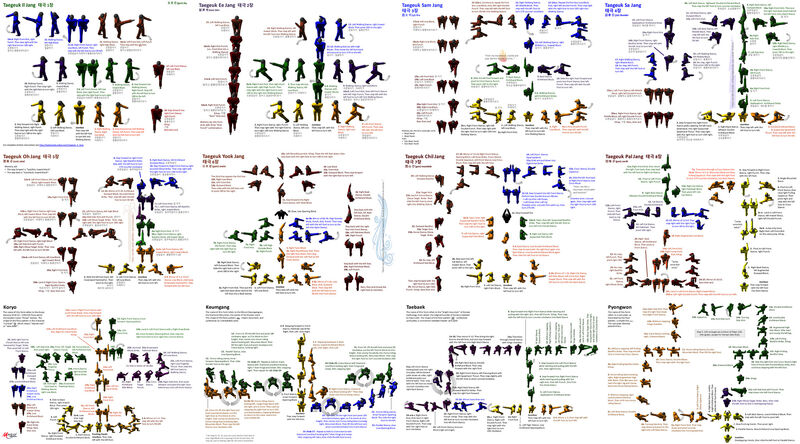