Taegeuk Yook Jang (also spelled Taegeuk Yuk Jang) is the sixth of eight "taegeuk" forms (i.e., poomsae) used by Kukkiwon and the World Taekwondo (WT). The word "Yook" is the number 6 in the sino-Korean numbering system.

Each taegeuk form is represented by a trigram (such as ☵); trigrams are divination symbols derived from the I Ching. The trigram for Taegeuk Yook Jang represents the concept of "Kam" (also spelled Gam). Kam symbolizes water, which is flowing and gentle but also persistent, able to wear away at the hardest stone. (See the article Taegeuk for additional detail regarding the symbolism of this form.)

This form requires very fluid movements, such as the immediate but complex transition from step 12a to step 12b: the left Roundhouse Kick to the right Low Block. Like water, the attacks are persistent, such as with steps 8-9: punch, kick, punch - uninterrupted by blocks. The final backwards steps 16-18 mimic the way water flows formlessly back to its container. 3rd Gup grade trainees practice this poomsae.

The following video is a step-by-step demonstration of Taegeuk Yook Jang, with notes. 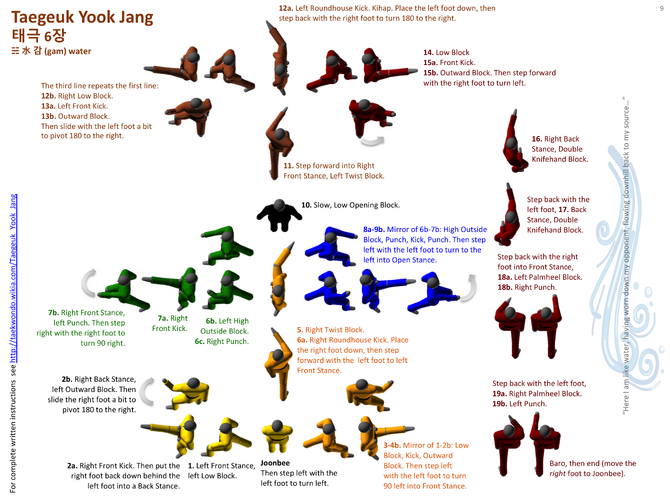 MOVING BACKWARD TO THE FIRST LINEEdit 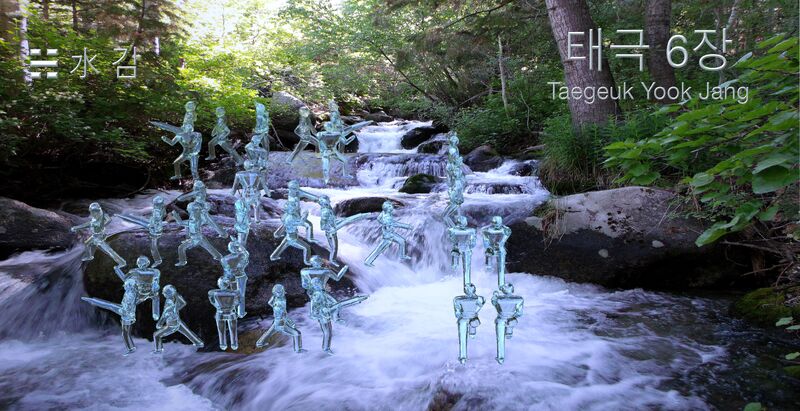 Retrieved from "https://taekwondo.fandom.com/wiki/Taegeuk_Yook_Jang?oldid=18802"
Community content is available under CC-BY-SA unless otherwise noted.