Taekwondo, (태권도) also spelled Taekwon-do or Tae Kwon Do, is a Korean martial art. It combines combat and self-defense techniques with sport and exercise. Gyeorugi, a type of sparring, has been an Olympic event since 2000. Taekwondo was developed by a variety of Korean masters during the 1940s and 50s as partial combination of traditional Korean martial arts (such as taekkyeon), Okinawan karate, and other traditions (such as Chinese quanfa).

The name taekwondo is generally credited to Choi Hong Hi (of the Oh Do Kwan), though some sources dispute the claim that he invented the term. Regardless, was the name's major advocate. The World Taekwondo Federation claims that taekwondo development was a collaborative effort by a council consisting of members from the Nine Original Kwans (portions of the minutes of this meeting can be found in the Korean language book "A Modern History of Taekwondo"), while the International Taekwon-Do Federation credits Choi Hong Hi solely.

Traditional taekwondo typically refers to the martial art as it was established in the 1940s-1960s in the South Korean military and in various civilian organizations, including schools and universities. Some authors also refer to some styles International Taekwon-Do Federation (ITF) taekwondo and any other "non-sport" style as traditional taekwondo.

Kukkiwon-style taekwondo (sometimes called Sport taekwondo, or WTF-style) was developed after traditional taekwondo and has a somewhat different focus, especially in terms of its emphasis on speed and competition (as in Olympic sparring), though of course self-defense is still at its core. Some authors refer to International Taekwon-Do Federation as a form of sport taekwondo, though as previously mentioned others refer to it as a kind of traditional taekwondo. Accordingly, the the terms "traditional" and "sport" are often inconsistently used.

Kukkiwon-style is now an event at the summer Olympic Games and is governed by the World Taekwondo Federation (WTF). Kukkiwon (Korea's national academy for taekwondo, also called the World Taekwondo Headquarters) is the traditional center for WTF taekwondo and was founded in 1973 by Dr. Kim Un Yong.

Although there are doctrinal and technical differences between sparring in the two main styles and among the various organizations, the art in general emphasizes kicks and punches thrown from a mobile stance. Taekwondo training generally includes a system of blocks, kicks, punches, and open-handed strikes and may also include various take-downs or sweeps, throws, and joint locks. Pressure points, known as jiapsul, are used, as well as grabbing self-defense techniques borrowed from other martial arts such as Japanese judo, Korean hapkido, and Korean wrestling or ssireum. Less commonly, taekwondo may also include weapons training.

Among the styles of taekwondo commonly practiced are:

Kicking - As compared to other martial arts, all styles of taekwondo (but especially sport taekwondo) places heavy emphasis on kicking. This is predicated on the principle that legs are longer and stronger than arms and so should be more effective in combat. Taekwondo kicking is also often higher than other martial arts kicking, often aiming for head-height.

Twisting power - Another characteristic common to all forms of taekwondo is the user of "twisting power" particularly in blocks and punches. The idea here is that a block or a punch is faster, more powerful, and more accurate if the arm and hand are rotating through the movement. So for example punches start palm-up at the waist then finish palm-down at the target so that the fist is twisting to the target. Taekwondo practitioners compare this to the rifling motion of a bullet.

Action / reaction - Another characteristic of taekwondo is the notion (for example) that as one part of the body moves forward, another part should be moving backward. So for example when practicing punches, the non-punching hand (the off hand) will aim forward before the punch so that it can be pulled sharply backward during the punch. It is believed that this gives the punch additional power and "snap."

Narrow stance - Unlike many other martial arts, taekwondo generally prefers a narrow stance rather than a wide stance. Wide stances are believed to provide more stability, but taekwondo practitioners believe that wide stances also diminish your ability to turn quickly. Narrow stances facilitate turning the body quickly, which is especially important in taekwondo given its emphasis on spinning and jumping kicks.

Relax / strike - Taekwondo practitioners believe that, one should relax the body before striking, then tense the relevant portions of the body during the strike. The premise is that this conserves energy (keeping one's muscles constantly tensed is tiring) and also improves power.

For some schools of ITF taekwondo, "sine wave" - The principle of relax / strike is taken further in some forms of ITF taekwondo, in that it is believed that the body should be raised before strikes or blocks, then lowered during the strike or block to improve power. Conversely, WTF taekwondo practitioners favor a constant-height approach to taekwondo, with the top of the head ideally maintained at the same height between blocks and strikes.

The oldest Korean martial art was an amalgamation of unarmed combat styles developed by the three rival Korean Kingdoms of Goguryeo, Silla, and Baekje, where young men were trained in unarmed combat techniques to develop strength, speed, and survival skills. The most popular of these techniques was ssireum and subak, with taekkyeon being the most popular of the components of subak. The Northern Goguryeo kingdom was a dominant force in Northern Korea and North Eastern China prior to the 1st century CE, and again from the 3rd century to the 6th century. Before the fall of the Goguryeo Dynasty in the 6th century, the Shilla Kingdom asked for help in training its people for defense against pirate invasions. During this time a few select Silla warriors were given training in taekkyeon by the early masters from Goguryeo. These Shilla warriors then became known as the Hwarang. The Hwarang set up a military academy for the sons of royalty in Silla called Hwarang-do, which means "the way of flowering manhood." The Hwarang studied taekkyeon, history, Confucian philosophy, ethics, Buddhist morality, social skills, and military tactics. The guiding principles of the Hwarang warriors were based on Won Gwang's five codes of human conduct and included loyalty, filial duty, trustworthiness, valor, and justice. Taekkyeon spread throughout Korea as the Hwarang traveled throughout the peninsula. 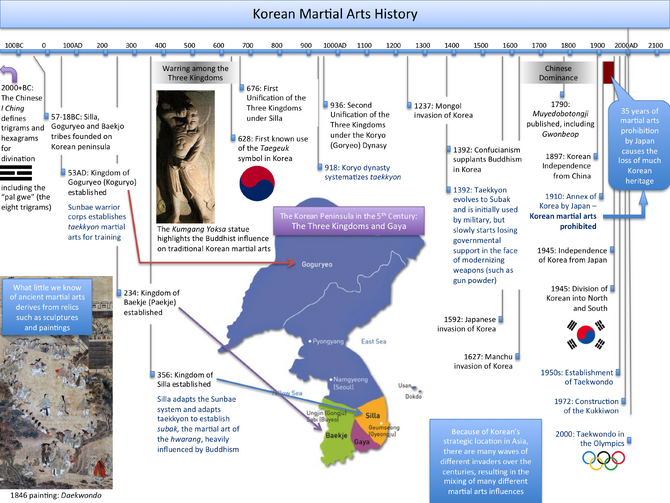 In spite of Korea's rich history of ancient and martial arts, Korean martial arts faded into obscurity during the late Joseon Dynasty. Korean society became highly centralized under Korean Confucianism, and martial arts were poorly regarded in a society whose ideals were epitomized by its scholar-kings. Formal practices of traditional martial arts such as subak and taekkyeon were reserved for sanctioned military uses. However, taekkyeon persisted into the 19th century as a folk game during the May-Dano festival, and was still taught as the formal military martial art throughout the Joseon Dynasty.

In 1910 Korea was occupied by Imperial Japan and the practice of Korean folk traditions (including martial arts) was prohibited. This occupation lasted until 1945, the end of World War II. Traditional Korean martial arts -- already faded into relative obscurity before the occupation -- were almost completely eliminated by the occupation.

When the Japanese occupation of Korea ended in 1945, Korean martial arts schools (kwans) began to open in Korea. Most of the men who opened these schools had studied karate while in Japan during the occupation, though many had studied other martial arts as well, including Chinese martial arts and older, traditional Korean martial arts such as taekkyon. As these schools grew in size, many opened "annex" locations to accomodate the growth. The initiation of new schools came to an end in 1950 however with the advent of the Korean War. When the war ended in 1953, new schools again began to appear, typically started by students of the original five kwans. 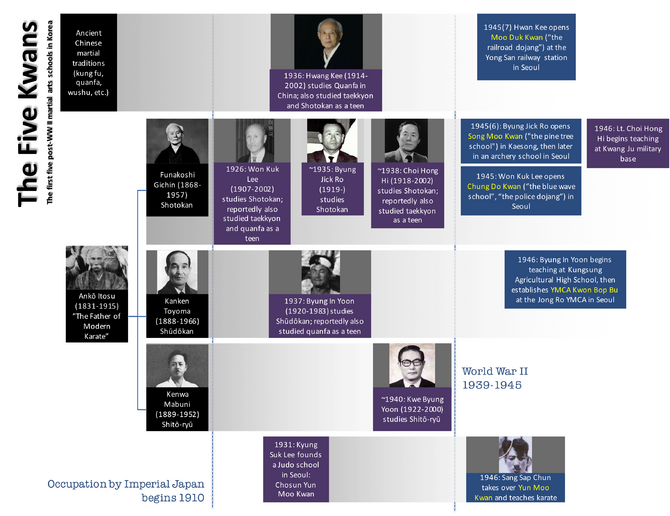 In 1952, at the height of the Korean War, a martial arts exhibition was performed for South Korean President Syngman Rhee. In one demonstration, Nam Tae Hi smashed 13 roof tiles with a punch. Following this demonstration, Rhee instructed Choi Hong Hi to introduce the martial arts to the Korean army. Rhee ordered that the various schools unify under a single system. The name "taekwondo" was submitted by either Choi Hong Hi (of the Oh Do Kwan) or Duk Sung Son (of the Chung Do Kwan), and was accepted on April 11, 1955. The Korean Taekwondo Association (KTA) was formed in 1959-1961 to facilitate the unification. 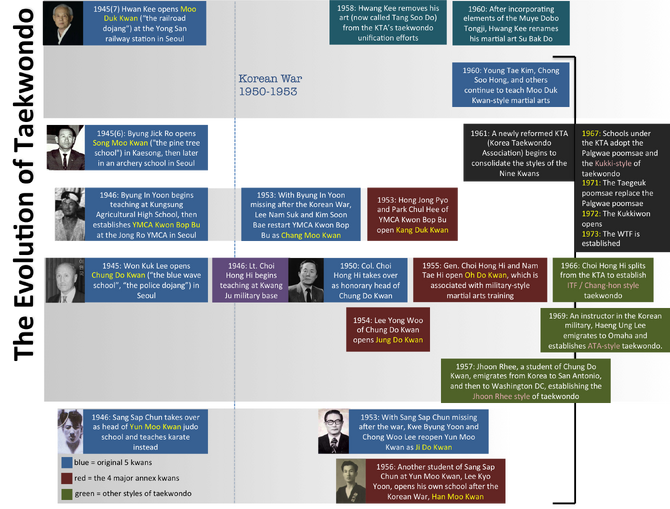 In the early 1960s, taekwondo made its debut worldwide with assignment of the original masters of taekwondo to various countries. Standardization efforts in South Korea stalled, as the kwans continued to teach differing styles. Another request from the Korean government for unification resulted in the formation of the Korea Tae Soo Do Association, which changed its name to the Korea Taekwondo Association in 1965 following a change of leadership. The International Taekwon-Do Federation was founded in 1966, followed by the World Taekwondo Federation in 1972.

Since 2000, taekwondo has been one of only two Asian martial arts (the other being judo) that are included in the Olympic Games. It became a demonstration event at the 1988 games in Seoul, and became an official medal event at the 2000 games in Sydney. In 2010, taekwondo was accepted as a Commonwealth Games sport.