In the WT, the majority of the attacks executed during free sparring are kicking techniques, whereas the ITF encourages the use of both hands and feet. WT sparring generally incorporates more protective gear (such as the chest  and head protectors) and so will generally involve heavier contact. ITF sparring may also be full-contact for some tournaments, but often is conducted as light-contact sparring, relying just on the padded sparring gloves and shoes to provide protection.

Rules vary by taekwondo style and by tournament.

Beginning in June 2018, WT-style scoring is as follows:

In most tournaments, adult participants fight for three rounds, usually 1.5 or 2 minutes long. Children generally spart for only two rounds, usually in shorter rounds. There's usually a 30 second break between rounds. Whoever has the most points after three rounds wins, in the event of a tie an additional sudden death round will take place - the first to score wins.

The International Taekwon-Do Federation's (ITF) sparring rules are similar to the WT's rules, but differ in several aspects. A typical example of ITF rules are:

Fouls in ITF sparring include: attacking a fallen opponent, leg sweeping, holding/grabbing, or intentional attack to a target other than the opponent.

Weight classes and divisions vary by tournament and style. At the Olympics, for instance, weight classes for sparring are:

Local tournaments include classes not only for sparring, but also for forms and breaking. These classes are likewise divided into male and female, but are also divided by age group and belt color. For Para-Taekwondo, additional classes are established based on Disability Classification.

The sparring area itself can also vary depending on the style of taekwondo involved and the type of tournament. A typical example is shown in the diagram below. Often the sparring area (i.e., the Contest Area) will be 8 meters by 8 meters square, though some tournaments may use larger Contest Areas (for example, 10 meters by 10 meters or more in ITF-style sparring) or even round sparring areas. Smaller regional tournaments may use 7 meter squares with just 1 meter safety zones. The Contest Area is often delineated with a blue line, and then is surrounded by a safety zone. The outside of the safety zone is often delineated with a red line. The diagram below shows 4 corner judges, but you will commony see judges 1 and 4 combined into a single line judge that sits near the recorder (the score-keeper).

The contest area itself is usually covered with an elastic mat like the ones used in dojangs. 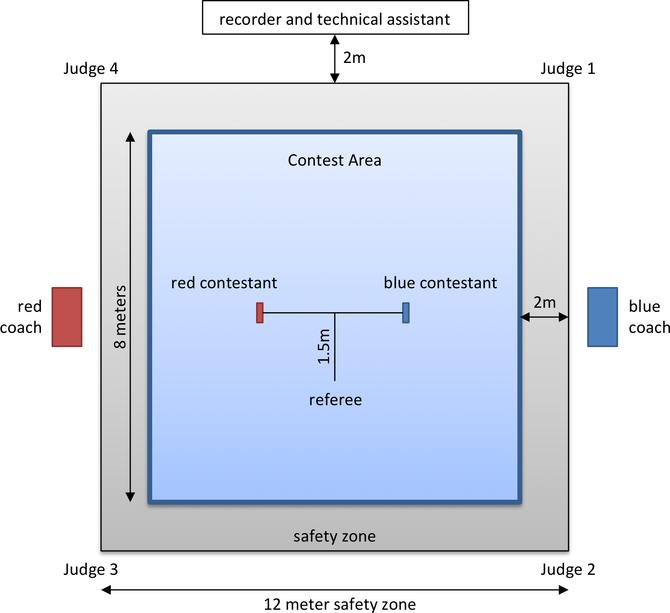 As of 2017, WT sparring rings may also be octagonal in shape: 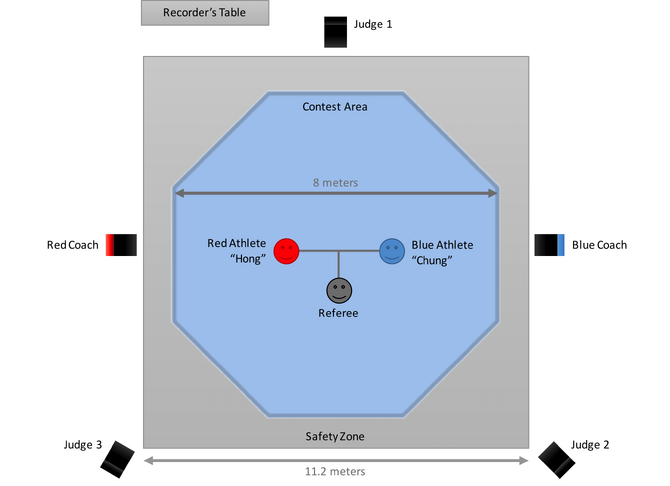 In WTF-style tournaments, the referee's commands and hand signals are used as follows: 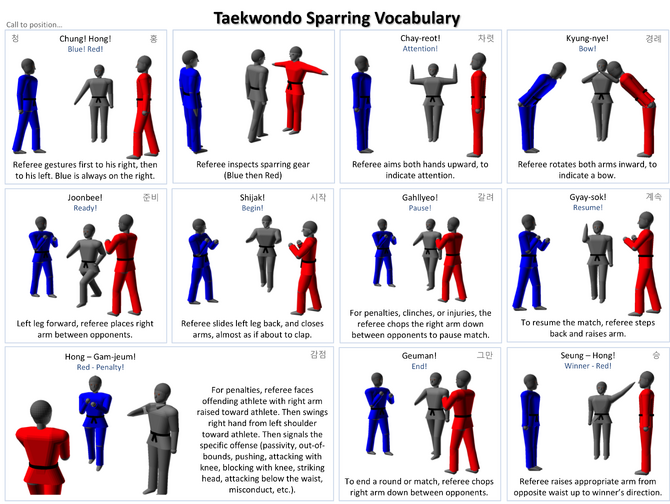 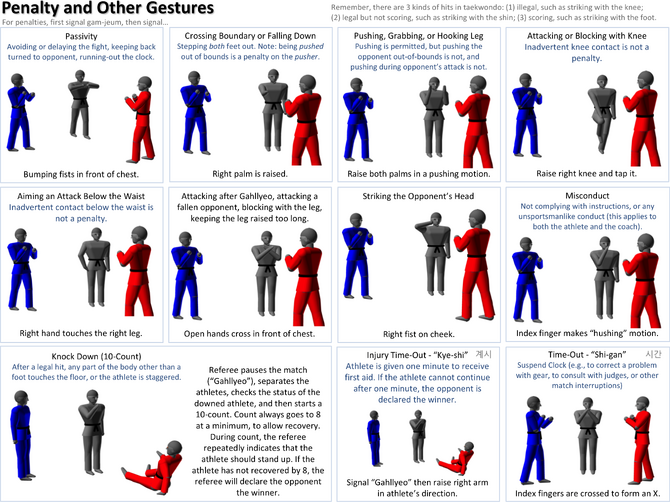 Each coach (blue and red) has a "card" that he can raise when he has an objection to a referee's or judge's ruling. When the coach raises the card to get the referee's attention, the referee halts the match (gahll-yeo) then take the coach's card and asks what the objection is. The referee then relocates to an isolated area on the mat and gestures for all the judges to come to him; the referee consults with the judges to determine if the coach was correct. If the coach was correct, the coach is given his card back and may continue using the card to make objections. If the coach was incorrect (even just once) his card is taken away and he is no longer able to make objections. The referee starts the match as before: "joon-bee" with the right hand held between the opponents, then stepping back and bringing both arms inward to signal "gyay-sok" ('continue').

At the end of several matches among multiple athletes, it's time to declare who is the first, second, and third place winners in that division. Typically this is done by first lining up the athletes facing the audience, calling up the 3rd place athlete first, then the 2nd place, then finally 1st place. The athletes are lined-up so that the 1st place athlete is on the audience's right. The referee then stands behind the 3rd place athlete, holds up 3 fingers above the athlete's head, and announces "third place!" Repeat for 2nd and 1st place. Have the athletes bow to the audience. Note that the athletes often do not bow to the judges and referees for sparring events, because these officials are spread all around the mat, and doing so would be time-consuming and impractical (i.e., slowing down the tournament too much).

As with taekwondo uniforms, sparring gear should be washed frequently to keep it in top shape. The hogu and helmet can simply be wiped-down with a damp cloth. Some shin guards and forearm guards are machine-washable.

In ITF-style sparring, a hogu is normally not worn. Helments may be worn, for children its mandatory. Sparring gloves ( like boxing gloves) are usually worn, and often sparring shoes.

At the start of a sparring match the referee will normally check each contestant's uniform and gear to ensure safety. Some things commonly looked for:

Of course, different competitors use different strategies and tactics to win at sparring. For beginners though, there are some basic tips that can help you learn to spar, win matches, and develop your own style.

Two-on-one sparring or more is often required for black belt tests. Some tips:

Taekwondo sparring can be a controversial topic in a number of contexts: