Construction of Taekwondowon began in 2007 and was completed in 2013. The campus is located in Muju County within the North Jeolla Province of South Korea (about a 3-hour drive south of Seoul, the location of the Kukkiwon). The Taekwondowon campus measures approximately 3,300 square kilometers. Facilities include a large arena, training centers, a theater, a museum, a restaurant, dormitories, and an administrative building. 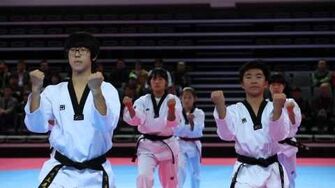 The Taekwondowon campus is viewable in the Satellite view on Google maps. Simply search on the phrase:

Or, here is the link: Taekwondowon on Google Maps. The round "tritaegeuk" building in the middle of the satellite image is the Taekwondowon main arena.

An excellent photo-tour of the Taekwondowon can be found here: http://www.samsungcntblog.com/2014/05/samsung-ct-student-reporters-let-me-introduce-you-to-taekwondowon-in-muju-the-home-of-taekwondo/