U-Nam is the name of an ITF/Chang Hon-style taekwondo form that is no longer practiced as part of the official ITF/Chang Hon curriculum.

U-Nam is the pseudonym of the first President of the Republic of (South) Korea, Dr. Syngman Rhee. Designed to develop agility by focusing on advancing and retreating, U-Nam was removed from the syllabus due to a disputed election in April 1960 that sparked nationwide protests against President Rhee’s rule (reference Wikipedia April Revolution). U-Nam’s only known published pattern description is in the Tae Kwon Do Teaching Manual (1959).

In July 2013, senior Taekwondo practitioners discovered that the “lost” form U-Nam was contained in the first book ever written on taekwon-do. The book was Choi Hong Hi's Tae Kwon Do Teaching Manual published in 1959. This discovery led to translations and analyses of the previously forgotten pattern, preserving it for future taekwon-do students worldwide.

U-Nam 42 movements and was created prior to 1959 apparently to honor and gain favor with the former President Syngman Rhee (whose pen name was U-Nam). This pattern was developed around the same time as Sam Il and is therefore among the first six Chang Hon forms from the years 1955-1959. So far, the only known publication of U-nam is in the 1959 eddition of the Tae Kwon Do Teaching Manual and it was already eliminated in the next edition.

U-Nam would still be lost if not for the efforts of Master George Vitale Ph.D. He, along with WTF Master Nathan Doggett, WTF Grandmaster Al Cole, Grandmaster Jung Woo Jin and Grandmaster C.K. Choi (Chang Keun) made this video possible. Grand Master C.K. Choi later revised this form in 2017 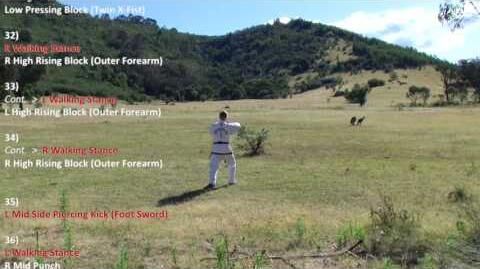 Needs to be converted to wiki markup: https://drive.google.com/file/d/0B70iCRYwLtk4Yl9mSE1sZkFTTDg/view

The ITF-style Black Belt forms are:

* Ko-Dang is an older form, replaced with Juche. Ko-Dang is still taught in some schools however.

U-Nam is an ITF/Chang Hon-style form that appears only in the 1959 edition of Choi Hong Hi's Tae Kwon Do Teaching Manual.

Retrieved from "https://taekwondo.fandom.com/wiki/U-Nam?oldid=19965"
Community content is available under CC-BY-SA unless otherwise noted.