Yul-Gok is the name of an ITF-style teul (form). The 38 movements of this pattern refer to Yi I's birthplace at the 38th latitude; the diagram 土 is said to represent the concept of "the scholar".

Yul-Gok is the pseudonym of the great philosopher Yi I (1536-1584 B.C.E.), nicknamed "the Confucius of Korea." Yi I was born on December 26, 1536. He was an infant prodigy who knew Chinese script at the age of three and composed poems in Chinese before the age of seven. By the age of seven, he had finished his lessons in the Confucian Classics. He passed the civil service examination in the literary department at the age of 13.

Yul-Gok was well-known for his development of a school of thought concerning the philosophy of the 12th century Confucian scholar Chu-Hsi. Chu-Hsi established the concepts of "li" (reason or abstract form) and "chi" (matter or vital force). He proposed that these two concepts were responsible for all human characteristics and the operation of the universe. As he defined the concepts, they are very similar to the concepts of body and soul as found in Western philosophy and religion. The "li," however, is not totally synonymous with the idea of an individual representing groups or models for each form of existence. Yul-Gok's school of thought supported the concept that the "chi" was the controlling agent in the universe and that the "li" was a supporting component. Experience, education, and practical intellectual activities were stressed in this school of thought. The other major school of thought, stemming from the philosophy of Chu Hsi ,was fostered by Yi Hwang (Yi ToiGye), who proposed that the "li" controlled the "chi" and stressed the importance of moral character building

ITF Taekwon-do forms often come in two styles: Sine Wave and non-Sine Wave. In either case, the basic movements are the same. The difference is in the "up and down" motion that's used (or not), the rhythm of the movements, and the breathing. See main article Sine Wave for additional details. 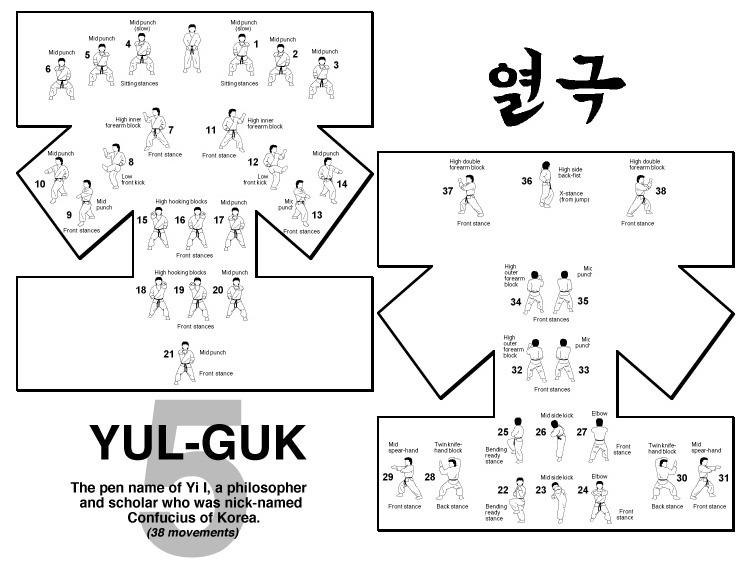 The other forms in the ITF-series of Color Belt forms are:

The primary reference is: